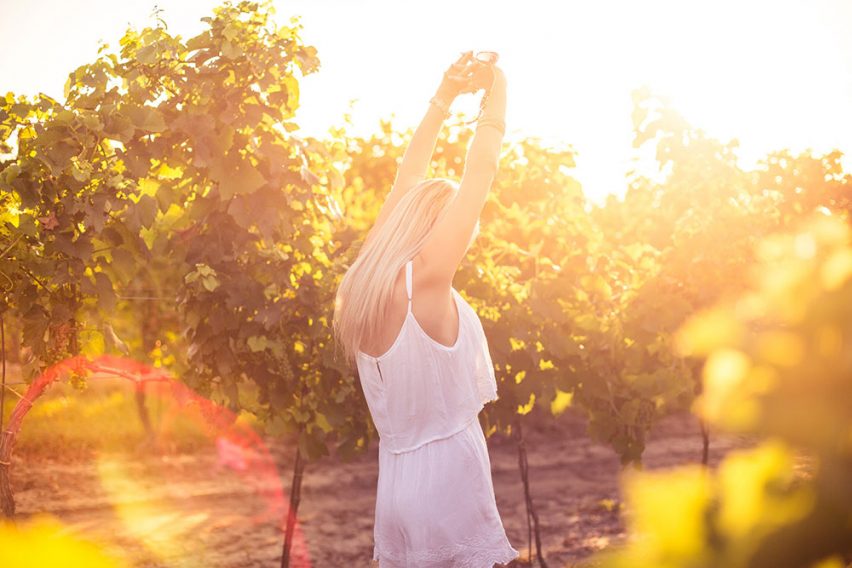 Let’s do this my pal… 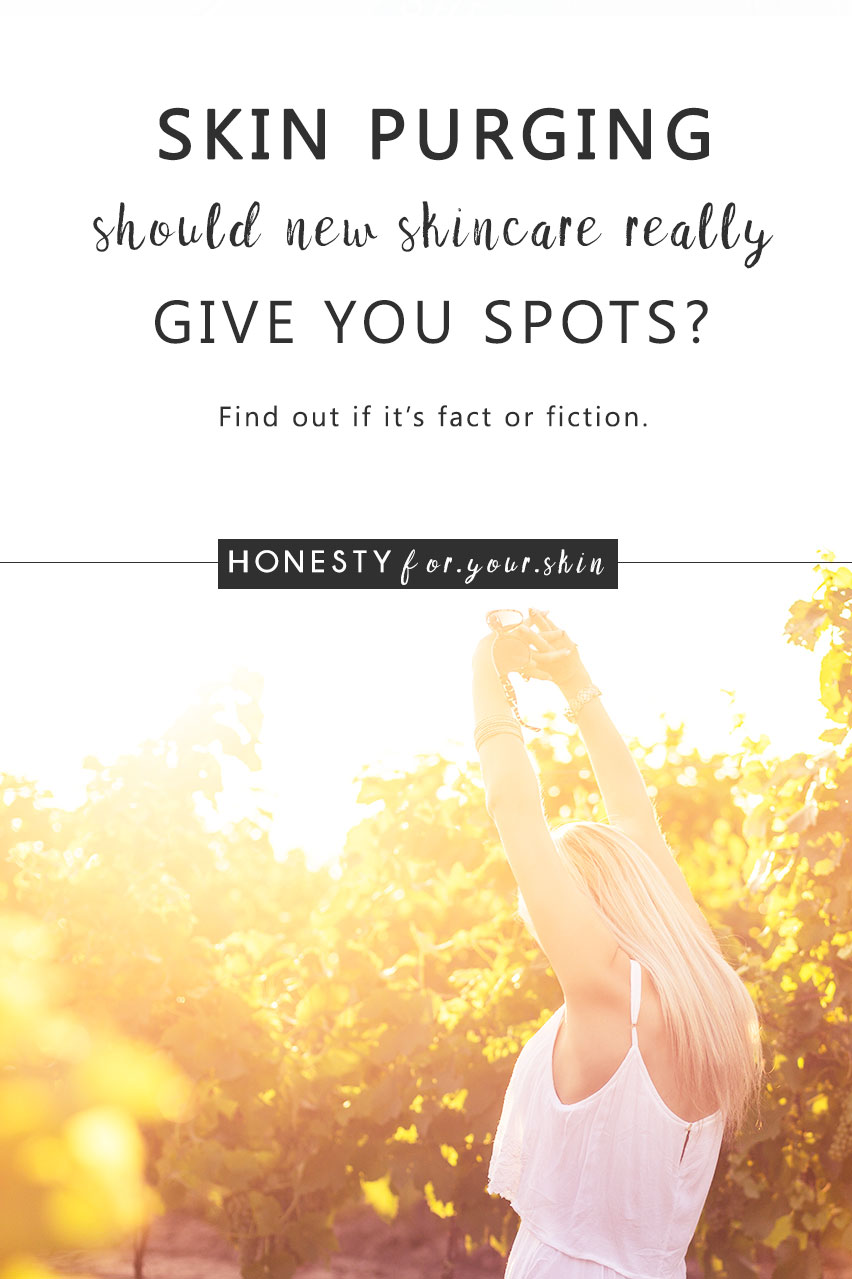 What Is Skin Purging?

…and what makes skin purging different from a breakout? Before we get into this, I want to say dear friend, you are beautiful! With or without spots, you are beautiful. It had to be said, because sometimes in the middle of a purge or breakout it’s oh so easy to forget. Trust me, I’ve been there! Now that you’ve remembered how jaw-dropingly gorgeous you are, let’s get to the science of skin purging.

Our technical term of the day, skin purging, is used to describe a quick increase in the number of spots you’d normally suffer from as a consequence of using a new skincare product. It’s most often described as your skin pushing out all the gunk that it has hiding – quickly. Gunk that would have come to the surface later, but by using this new skincare product you’ve brought later to now.

The key to understanding this process is that your skin should only purge with certain types of skincare… and this is one sure-fire way to understand whether you’re experiencing purging or a non-compatible skincare breakout. More about this later.

Unlike breakouts, if you’re experiencing skin purging, the effects should clear within 2-4 weeks. It’s a one off, short-term thing that you could liken to going sugar-free. You have some withdrawal headaches to push through before you can burst out into newly found sugar-free bliss.

Is Skin Purging Fact or Fiction?

Caroline Hirons says No, purging is fiction. Dermatologists say Yes, skin purging is fact. The internet says yes, no, yes, no. Fact, fiction, fact, fiction. Just who should you believe?

This my friend, is where science comes in really handy… and that’s exactly what we’re going to look at next. Can the concept of skin purging be supported by science? Does the science make sense for your skin type. Does it make sense for the ingredients in your new skincare pick?

The Theory Behind Skin Purging

Did you know if you have a significant change in your diet, you’re likely to see the effects in your hair and nails? You won’t see the effects over night, but you will see them over a couple of months. That’s because your hair and nails are growing steadily underneath the surface. They have roots hidden away where you can’t yet see them. When you make a change, your roots quickly enjoy the benefit and over time their new beauty reveals itself.

This is how the theory of skin purging works. Skin Purging: Due to Increased Exfoliation.

The foundations of your spots are laid well before any visible sign of them is to be seen. When you do see a spot in the form of an angry red cyst or white-headed bulge you’re really just seeing the final stage of a spots life. The first stages begin far below the surface.

Some skincare products speed up this cycle. Skincare products that can increase your skins natural rate of exfoliation. By doing this they temporarily cause more dead skin cells to become trapped within your pores. This feeds existing mixing pots of sticky sebum and dead skin. Speeding up the formation of spots that were already brewing beneath the surface.

This can also be worsened if you naturally suffer from inflammatory acne. The kind that’s often raised and red. Skincare products that speed up exfoliation are pushing your skin to do something it normally doesn’t… and that change can initially cause mild irritation. Your body’s response to irritation is inflammation and if acne spots already exist, that inflammation is going to push them to the surface. It won’t cause new spots to be created but it will push existing ones to the surface.

Once your skin acclimatises to its new, speedier level of exfoliation and the purge plugs have been pushed out – skin purging is over. This usually takes a month or so.

Spot outbreaks caused by skin purging make a lot of sense. If you rub charred rice from the bottom of a saucepan, it’s going to make the washing water a lot dirtier before it creates a sparky finish.

Which is why I’ll introduce you to this 2008 published study whose sole purpose was to trial new acne treatments which didn’t provoke skin purging, called acne flaring in the study. It picks up on skin purging aka acne flaring as an industry accepted concept. Dermatologists who prescribe tretinoin as an anti-acne treatment will almost always warn patients that it’s going to make acne worse before it gets better.

It’s a hump back whale ride to anti-acne station.

New skincare causing you spots? Have you ever had this happen? Skin purging may be your answer… #skintips #bbloggers pic.twitter.com/Otn2xULdru

What’s even more interesting, is that the study shows acne flaring can be over-come by incorporating an antibiotic into the treatment cream (clindamycin phosphate). Can you see how this would over-come the purging? It would stop the bacteria from feasting on your dead skin cells which would stop your immune system triggering an inflammatory reaction. That’s step 5 and  from above.

How Can You Be Certain It’s Skin Purging?

…and how can you be certain it’s not a plain and simple breakout? Because not all breakouts from new skincare products will be skin purging. Some skincare products are not a match made in heaven and might contain pore blocking ingredients (comedogenic ingredients) that cause spots all by themselves.

This is the important part ‘eh.

So, just how do you spot them? Dear friend, these are the key actives that are known to speed up your skins natural exfoliation rate. Some of these are very obvious cleansing brushes anyone (?) and others can lurk in moisturisers and even serums.

Active Ingredients that can cause skin purging;

If your new skincare pick contains one of these active ingredients and after you started to use it, you saw more spots rearing, you could likely be experiencing skin purging.

When It’s Definitely Not Skin Purging

AKA – when you should ditch your new skincare product as quickly as a hot potato. Sometimes acne flaring is not skin purging and it’s actually just irritation. In this situation your skin is reacting to the new product and it’s never going to like it… there’s no purging phase to overcome.

This is most likely if one or more of the below ring true for you;

If anyone of these is true for you, it’s the product. Bin it, move on and don’t look back.

Can You Minimise Your Skin Purging?

Oh yes. You absolutely can. This is a little like the choice of ripping off a plaster or peeling it away slowly. You only decision is which is better for you? It doesn’t have to be the plaster ripping – honestly.

Skin purging is all about your skins natural rate of exfoliation being sped up. To avoid, or lessen the risk of skin purging you just need to slowly increase your skins natural rate of exfoliation. That might mean using a 1% salicylic acid treatment instead of a 2%. It could mean using the product twice a week instead of 3 times.

Think of it like the gym. Do you want to join and swing yourself straight into a high intensity workout class… or do you want to gradually build your body to HIIT?

The Bottom line: Is Skin Purging a Thing?

Yes, in my opinion skin purging is a thing. It makes scientific sense. It’s often mentioned in dermatological journals as acne flaring and most well-trained dermatologists will warn of it as a side-effect to strong anti-acne treatments.

Have you experienced skin purging or acne flaring? Had you heard of it? Let’s chat, tell me in the comments below…

Looking for real, honest skincare advice that's based on science? You're in the right place my friend, Learn more... 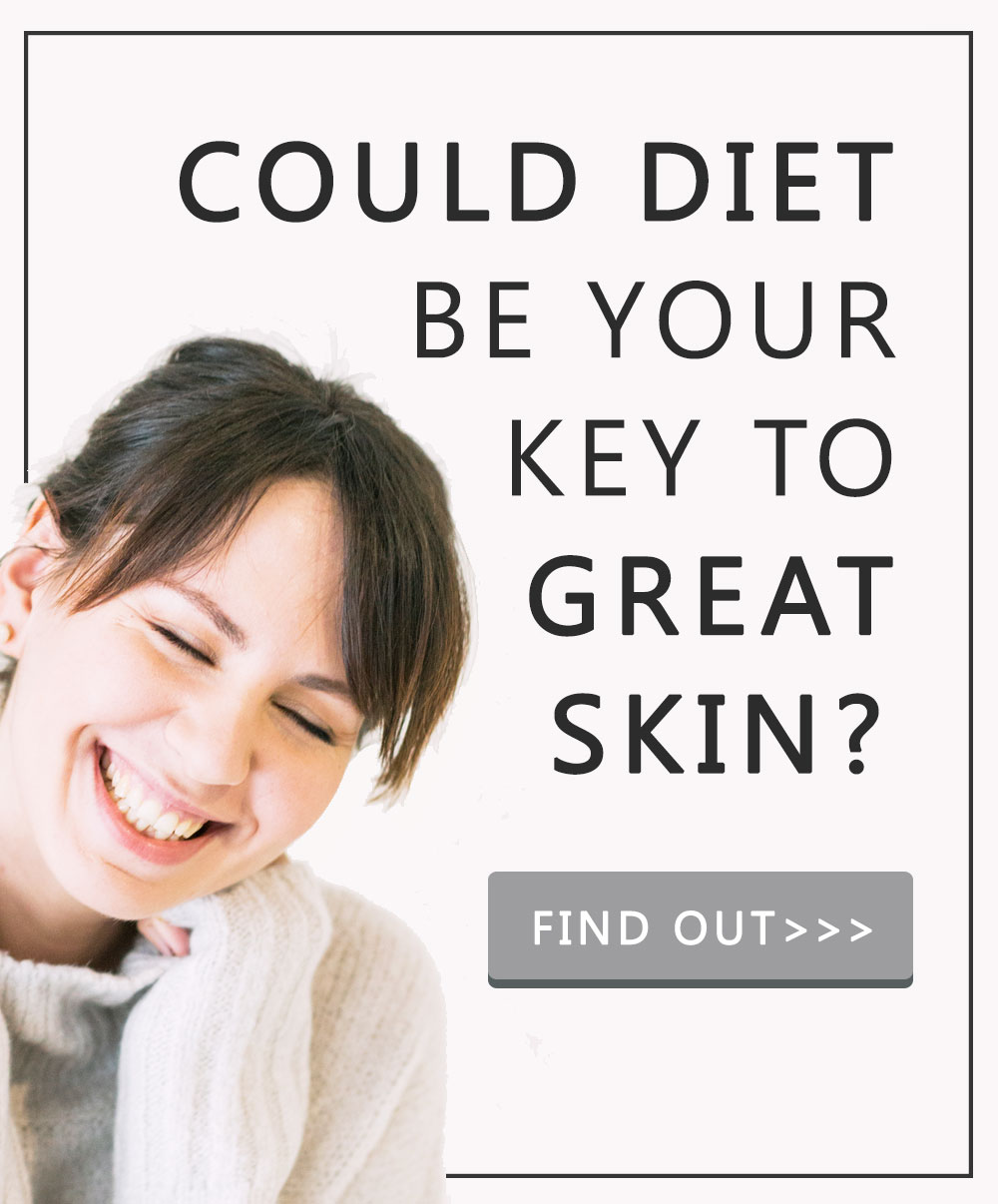